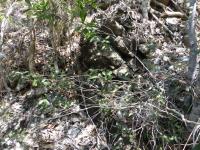 
Desmodium kaalense is endemic to New Caledonia, where it is restricted to the northwest of Grande Terre (Mt. Kaala, pic Yago). It is found in shrubland on ultramafic substrate from 30 to 300 m asl. Known from two locations, its extent of occurrence (EOO) and area of occupancy (AOO) are 28 and 12 km², respectively. The main threat is posed by uncontrolled bushfires. Therefore, D. kaalaensis is listed as Endangered (EN) under criteria B1ab(iii,v)+2ab(iii,v).

D. kaalaensis is endemic to New Caledonia, where it is restricted to the northwestern part of Grande Terre. Known from Mont Kaala, it was recently observed at Pic Yago.

D. kaalaensis occurs in shrubland on ultramafic slopes between 30 and 300 m asl.

The main threat is posed by uncontrolled bushfires.

D. kaalense is protected by legislation in Province Nord, but does not occur in any protected areas. This species would benefit from ex situ and in situ emergency conservation actions. It is recommended to monitor and preserve known populations in delimited areas of the mining site, and to inform the local authority responsible for the coordination of the firefighting effort about the presence of the species in the concerned areas. It would also be advised to run multiplication tests in order to assist future planting operations. Finally, this species should be sought after in similar habitats.