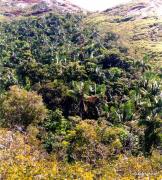 
Kentiopsis magnifica is a solitary, large emergent, gregarious, tree palm endemic of New Caledonia, that is restricted in the northeast of Grande Terre. It occurs in an area along Col d'Amos and the Pam Peninsula ridge, in dense humid forest on soils derived from schistose rocks from 480-550 m asl. The main threats come from fire that is frequent in Col d'Amos and the degradation of forest habitat caused by pigs. Population size is unknown but field observations report a population locally abundant with a good regeneration. It has an area of occupancy (AOO) and extent of occurrence (EOO) respectively equal to 24 km² with three locations. Therefore, considering the threats of frequent bushfires in the region and habitat destruction by pigs, K.magnifica is considered Endangered (EN) B1ab(iii,v)+2ab(iii,v) with a decline of the quality of habitat and number of mature individuals.

Kentiopsis magnifica is a tree palm endemic of New Caledonia where it is known from 3 subpopulations restricted in the northeast of Grande Terre. (from Pam:Monguibobo, Haute vallée de la Mayvetch to Amos)

Population size is unknown but field observations report a population locally abundant with a good regeneration. The number of subpopulation is estimated to 3

The main threats come from frequent fires at Col d'Amos and habitat damage by pigs. Possible impacts by rats on the seeds and rusa deer (Rusa timorensis) on the seedlings have been noted.

Kentiopsis magnifica is protected by legislation in Province Nord and Province Sud but it does not occur in any protected areas. This species would benefit from ex-situ and in-situ emergency. It is recommended to inform the DSCGR (emergency services), responsible for the coordination of the firefighting effort on the presence of the species in the concerned areas. It is moreover suggested to promote its growing in nurseries, to integrate it in future green space planning and to raise awareness on this species amongst local stakeholders.